Seabright Beach was once known as ‘"Castle Beach"

Scholl Marr Castle existed between 1929 and 1967, and featured a restaurant, snack bar and other businesses.

“It was such a rewarding and exciting journey,”

said co-author Traci Bliss whose family goes back five generations in the Seabright area. She said that the book has about 50 different sources of historic photos from UC Santa Cruz to the Natural History Museum to individuals and families in Seabright. 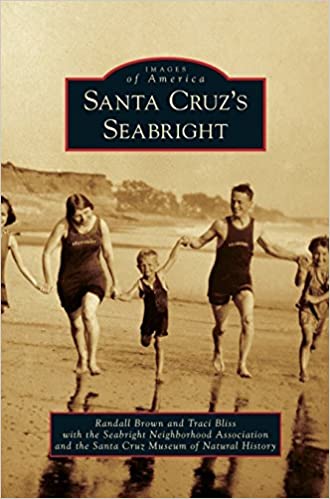 Seabright, located atop towering sandstone cliffs and bordered by the Santa Cruz Small Craft Harbor and San Lorenzo Point, overlooks the famous Santa Cruz Boardwalk and a state beach where locals and lifeguards have performed many valiant acts of ocean rescue. Originally a Victorian-era campground, the neighborhood features special amenities, including a natural history museum, thanks to a long tradition of community activism. The creation of the Santa Cruz Harbor in the 1960s completed Seabright s transition from a summer resort to a year-round neighborhood. The beach doubled in size due to the littoral drift of sand blocked by the harbor seawall, protecting the vulnerable cliffs from the assault of winter waves.”

All proceeds go to support education programs at the Santa Cruz Museum of Natural History.